One day I'd love to write a story about two guys who are friends. One of them is starstruck and the other just has this deer-in-the-headlights look. The story would NOT be about them having it all together. The story would be about them having some elaborate birth certificate from another planet or dimension. It would be about them wandering about to try to find out how to get back to this place of birth, which they have not located on any maps or in any atlases. Oh, did I mention the birth certificate is signed with the pawprint of a rather large lion? This makes it harder to carry around, so the starstruck one keeps it inside the zip-up bag for his portable telescope. At different times on the journey, one or the other of these guys cannot see the pawprint, they can't make out the names of the places the birth certificate claims that they come from, and that's o.k. since it's written in a language they can't understand and since they are in characters that they couldn't decipher anyway. However, the words certificate of birth are written in English with standard Roman letters, which are familiar to both the starstruck one and the deer-in-the-headlights one. Also their names are written in the familiar Roman script, but then violently crossed out, and next to each there are inscriptions in gold-as-if-tried-by-fire. These characters are more fluid than arabic, more harsh than cyrillic, more fine and crafted than hebrew, more dangling-yet-firm than sanskrit. None of the wanderers knows what these magical words are, but each knows that it is supposed to be his very truest name. That is why they wander, trying to find some door, some gateway that will get them home, and also, it's a way for them to understand who they have to be in this world as well. Sometimes those names and the pawprint seem to disappear, but sometimes they will conduct these luminol tests and the whole birth certificate will appear to be covered in one huge bloody signature. it seems that at one point, somewhere that whole contract was literally bathed. Luminol doesn't lie. I would imagine the rest of the time they might spend nights camping on roadsides behind trees, eating cheese and crackers, and telling each other stories.

Hey! Maybe I just wrote it. So, let me title it: The Two Wanderers

...that Holy Mother Church is experiencing a most harsh trial. Clerical sex-abuse scandals, coverup and a broken episcopate aside, I'm referring mainly to the strange and confusing (though sadly, not quite unpredictable) pontificate I am now calling the Francis experiment. Certainly we are not at the lowest or darkest of times in Her history, but in our times, and especially with yet another perplexing 'synod'* upon us, we are getting lower and darker. I'm only putting this here for my own reflection as I'm sure this page gets only the occasional read. I don't have any ax to grind either. I just hope for the current stranglehold on the Church to one day be a thing of the past. It is clear to me (after years of trying to give Francis the benefit of the doubt) that most of the leadership of the Church has gone over to a very dark place. They lack supernatural faith and seem fixated on worldly concerns and the opinions and approval of men. For these reasons they lack moral leadership and bring forth little spiritual fruit. Thank God for a handful of holy laypeople, priests and bishops who are issuing statements and warnings, providing clarity and direction in a time so ridden w poison, confusion and doubt. I wonder if this phase will continue for months, years or decades. Indeed it could go on even longer. Our Lady of Good Success, pray for us. 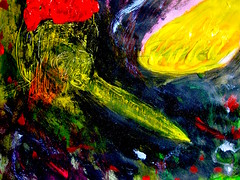 Today David Behringer critiqued my painting Fresh Grain In The Ear on his channel, The 2%.

At sight of an old gentleman in a Welsh wig, sitting behind such a high desk, that if he had been two inches taller he must have knocked his head against the ceiling, Scrooge cried in great excitement:

`Why, it's old Fezziwig. Bless his heart; it's Fezziwig alive again.'

Old Fezziwig laid down his pen, and looked up at the clock, which pointed to the hour of seven. He rubbed his hands; adjusted his capacious waistcoat; laughed all over himself, from his shows to his organ of benevolence; and called out in a comfortable, oily, rich, fat, jovial voice:

Scrooge's former self, now grown a young man, came briskly in, accompanied by his fellow-prentice.

`Dick Wilkins, to be sure.' said Scrooge to the Ghost. `Bless me, yes. There he is. He was very much attached to me, was Dick. Poor Dick. Dear, dear.'

`Yo ho, my boys.' said Fezziwig. `No more work to-night. Christmas Eve, Dick. Christmas, Ebenezer. Let's have the shutters up,' cried old Fezziwig, with a sharp clap of his hands,' before a man can say Jack Robinson.'

You wouldn't believe how those two fellows went at it. They charged into the street with the shutters -- one, two, three -- had them up in their places -- four, five, six -- barred them and pinned then -- seven, eight, nine -- and came back before you could have got to twelve, panting like race-horses.

`Hilli-ho!' cried old Fezziwig, skipping down from the high desk, with wonderful agility. `Clear away, my lads, and let's have lots of room here. Hilli-ho, Dick. Chirrup, Ebenezer.'

Clear away. There was nothing they wouldn't have cleared away, or couldn't have cleared away, with old Fezziwig looking on. It was done in a minute. Every movable was packed off, as if it were dismissed from public life for evermore; the floor was swept and watered, the lamps were trimmed, fuel was heaped upon the fire; and the warehouse was as snug, and warm, and dry, and bright a ball-room, as you would desire to see upon a winter's night.

`Why. Is it not. He has spent but a few pounds of your mortal money: three or four perhaps. Is that so much that he deserves this praise.'

`It isn't that,' said Scrooge, heated by the remark, and speaking unconsciously like his former, not his latter, self. `It isn't that, Spirit. He has the power to render us happy or unhappy; to make our service light or burdensome; a pleasure or a toil. Say that his power lies in words and looks; in things so slight and insignificant that it is impossible to add and count them up: what then. The happiness he gives, is quite as great as if it cost a fortune.'


"Yet Lurga in that room was overmatched. Suddenly a greater spirit came-one whose influence tempered and almost transformed to his own quality the skill of leaping Mercury, the clearness of Mars, the subtler vibration of Venus, and even the numbing weight of Saturn.

"In the kitchen his coming was felt. No one afterwards knew how it happened, but somehow the kettle was put on, the hot toddy was brewed. Arthur-the only musician among them-was bidden to get out his fiddle. The chairs were pushed back, the floor cleared. They danced. What they danced no one could remember. It was some round dance, no modern shuffling: it involved beating the floor, clapping of hands, leaping high. And no one, while it lasted, thought himself or his fellows ridiculous. It may, in fact, have been some village measure, not ill-suited to the tiled kitchen: the spirit in which they danced it was not so. It seemed to each that the room was filled with kings and queens, that the wildness of their dance expressed heroic energy, and its quieter movements had seized the very spirit behind all noble ceremonies.

"Upstairs his mighty beam turned the Blue Room into a blaze of lights. Before the other angels a man might sink; before this he might die, but if he lived at all he would laugh. If you had caught one breath of the air that came from him, you would have felt yourself taller than before. Though you were a cripple, your walk would have become stately: though a beggar, you would have worn your rags magnanimously. Kingship and power and festal pomp and courtesy shot from him as sparks fly from an anvil. The ringing of bells, the blowing of trumpets, the spreading out of banners are means used on earth to make a faint symbol of his quality. It was like a long sunlit wave, creamy-crested and arched with emerald, that comes on nine feet tall, with roaring and with terror and unquenchable laughter. It was like the first beginning of music in the halls of some king so high and at some festival so solemn that a tremor akin to fear runs through young hearts when they hear it. For this was great Glund-Oyarsa, King of Kings, through whom the joy of creation principally blows across these fields of Arbol known to men in old times as Jove and under that name, by fatal but not inexplicable misprision, confused with his Maker-so little did they dream by how many degrees the stair even of created being rises above him."

You get this strange look into Florida history when you ride a train. You see the names of towns that used to be hub towns that now are almost unknown, aside from the train crowd. You can also get this sense taking older roads which were more dominant before the current interstate pushed them into a kind of forgetful backland. I love seeing these layers, imagining whole lifeways associated with them, remembered by perhaps a few, and now forgotten. There is a sense of sadness mixed with the flash and excitement of the new. You might begin to see the present as a future backland, but in this meditation on brokenness and layers you might also find hidden consistencies, which map onto the places between old roads, old trackways and the current landscape. Taking a train ride is certainly good for the noggin. 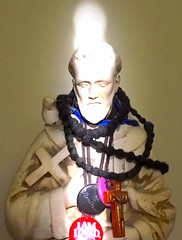 "Praised be You my Lord with all Your creatures,
especially Sir Brother Sun,
Who is the day through whom You give us light.
And he is beautiful and radiant with great splendour,
Of You Most High, he bears the likeness." 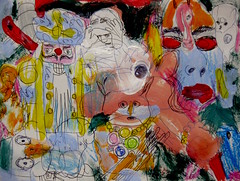 Before It's Too Late
original artwork by: Bill Rogers 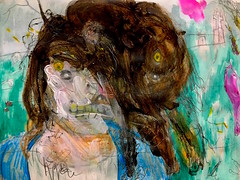 Be aware of your surroundings at all time. You never know who might turn up.
Collapse